This population includes young children forcibly displaced by the same chronic and acute violence described by the United Nations High Commissioner for Refugees in a 2014 report,1 as well as their mothers, many of whom were victims of violence by intimate partners or criminal armed actors in their home countries. Many of these families experienced further violence, including kidnapping and rape, during their journey to find safety in the United States.

Family detention is wrong. In 2009, your administration wisely decided to stop detaining families at the T. Don Hutto Detention Center in Taylor, Texas, following years of litigation and other advocacy on the deplorable conditions of confinement and treatment of children at that facility. In summer 2014, unfortunately, you decided to return to the failed practice of family detention at facilities in Artesia, New Mexico, and Karnes County, Texas, together holding a total of more than 1,000 vulnerable mothers and children. On September 23, U.S. Immigration and Customs Enforcement announced plans to open a massive 2,400-bed family detention facility in Dilley to be run by a private prison company at substantial cost.2 We urge you to reverse course immediately by closing Artesia and Karnes and cancelling plans to build in Dilley.

In the meantime, we also urge you to instruct DHS to eliminate its widely reported no-bond policy for families held in detention. There is no evidence that detention deters unauthorized migration. More importantly, imposing mandatory detention on women and children who have established a credible fear of persecution in order to deter other families from seeking asylum in the United States is an egregious misuse of the government's detention authority, and violates the essence of due process.

The problems with family detention are numerous.

1. Family detention inhibits access to fair hearings.
Immigration detention, particularly in remote locations, creates serious barriers to due process by making it very difficult to identify and work with legal counsel – especially for detained individuals with limited funds – and to build cases for asylum or other legal relief. Several studies have documented the impact of counsel on the outcome of cases for asylum seekers and other immigrants – including a shocking 3 percent success rate for detained, unrepresented immigrants.4 The Legal Orientation Program, while important to provide basic legal information to detained individuals, is not a substitute for legal counsel, and even these basic presentations were not made available for many weeks at Artesia and Karnes. Furthermore, court hearings by video teleconference, which to date are the practice at Artesia and Karnes, present significant due process concerns.5

2. Family detention is detrimental to physical and mental health, especially for asylum seekers and young children. It also damages the family structure by undermining parents' authority.
Detention harms children's health. Their physical and psychological development suffers during detention, and the harms can be long-lasting. Being held in a prison-like setting, even for a short period of time, can cause psychological trauma for children and increase their risk factor for future mental disorders.6 According to Physicians for Human Rights and the Bellevue/NYU Program for Survivors of Torture, detention can also exacerbate the trauma experienced by both children and adults who have fled violence in their home countries – precisely the population detained at Artesia and Karnes.7 Finally, detention damages the family structure in particular by stripping parents of their role as arbiter and decision-maker in the family unit, confusing children and undermining child-rearing.8 This adds to the already extreme stresses on detained children and erodes their trust in their parents at a time when they need it most.

4. Family detention undermines efforts to address the mass incarceration problem.
The United States is already the world's leading incarcerator, with over 2.3 million people held in prisons and jails. Under your leadership, Attorney General Holder has taken important steps toward reducing federal incarceration levels, but at the same time you are proposing to normalize the detention of families, even contracting with private prison companies to construct new facilities with thousands of beds. Expanding family detention is inconsistent with the work your administration has undertaken to address mass incarceration.

5. International human rights law strongly disfavors the use of administrative immigration detention, and rejects it completely for children.
The UN Working Group on Arbitrary Detention, the UN Committee on the Rights of the Child (CRC), and the UN High Commissioner for Refugees have all made this opposition to immigration detention clear.14 Indeed, the CRC stated in 2012 that detaining children “constitutes a child rights violation and always contravenes the principle of the best interests of the child.”

The federal government already faces litigation highlighting many of the problems listed above at the new family detention facility in Artesia.15 There is no evidence that the warehousing of vulnerable mothers and children fleeing persecution and violence in their home countries will decrease border crossings. Family detention will certainly not ensure access to protection to those who qualify. The expansion of this shameful practice will, however, forever alter your legacy. We urge you to uphold the values of fairness, compassion, and human rights, as well as the best interests of children. Please close Artesia and Karnes immediately, cancel the contract for Dilley, and roll back all further plans to expand family detention.

1. U.N. High Commissioner for Refugees [UNHCR], Children on the Run: Unaccompanied Children Leaving Central America and Mexico and the Need for International Protection (March 2014), available at http://www.unhcrwashington.org/sites/default/files/UAC_UNHCR_Children%20on%20the%20Run_Full%20Report.pdf.
2. U.S. Immigration and Customs Enforcement, “ICE to open additional facility in South Texas to house adults with children,” Sep. 22, 2014, available at http://www.ice.gov/news/releases/1409/140922dilley.htm. Forrest Wilder, Feds Set to Open Massive New Family Detention Center in November, Texas Observer, Sep. 23, 2014, available at http://www.texasobserver.org/feds-set-open-massive-new-family-detention-center-november/.
3. John Stanton, Government Declares Undocumented Immigration Child, Mother, A 'National Security Threat', Buzzfeed, Aug. 5, 2014, available at http://www.buzzfeed.com/johnstanton/government-declares-undocumented-immigrant-child-mother-a-na#4bkg6ufhttp://www.nytimes.com/2014/09/06/us/in-remote-detention-center-a-battle-on-fast-deportations.html?smid=tw-share&_r=0.
4. The New York Study Group on Immigrant Representation reported that only 3 percent of detained, unrepresented immigrants apprehended in New York or with cases heard in the New York immigration court reach a successful outcome in their cases (defined as legal relief or case termination). 13 percent of unrepresented non-detained immigrants reach a successful outcome in their cases. The number jumps to 74 percent when the non-detained immigrant is represented. See Steering Committee of the New York Immigrant Representation Study Report, “Accessing Justice I: The Availability and Adequacy of Counsel in Removal Proceedings,” Cardozo Law Review, (2011) Vol. 33:2, p. 364 and seriatim, available at http://www.cardozolawreview.com/Joomla1.5/content/33-2/NYIRS%20Report.33-2.pdfhttp://www.cardozolawreview.com/content/denovo/NYIRS_ReportII.pdf (“people in the New York immigration courts with a lawyer are 500 percent as likely to win their cases as those without representation.”); Government Accountability Office, U.S. Asylum System: Significant Variation Existed in Asylum Outcomes Across Immigration Courts and Judges, GAO-8-940 (Washington, DC: GAO, 2008), p. 7, available at http://www.gao.gov/new.items/d08940.pdf (Representation generally doubled the likelihood that immigration judges would grant asylum to affirmative and defensive asylum applicants compared to those without representation, after statistical controls were applied.”); Jaya Ramji-Nogales, Andrew I. Schoenholtz, and Philip G. Schrag, Refugee Roulette: Disparities in Asylum Adjudication, 60 Stan. L. Rev. 295 (2007), p. 287 (“whether an asylum seeker is represented in court is the single most important factor affecting the outcome of her case.” Asylum seekers represented by a lawyer were roughly three times more likely to be granted relief than asylum seekers not represented by legal counsel.), available at https://www.acslaw.org/files/RefugeeRoulette.pdf.
5. Human Rights First, Jails and Jumpsuits: Transforming the U.S. Immigration Detention System – A Two-Year Review (2011), p. 32, available at http://www.humanrightsfirst.org/wp-content/uploads/pdf/HRF-Jails-and-Jumpsuits-report.pdf.
6. Janet Cleveland, Cecile Rousseau, and Rachel Kronick, Brief Submitted to the House of Commons Standing Committee on Citizenship and Immigration concerning Bill C-31, the Protecting Canada's Immigration System Act, “The harmful effects of detention and family separation on asylum seekers' mental health in the context of Bill C-31,” (April 2012), pp. 3, 7, available at http://www.csssdelamontagne.qc.ca/fileadmin/csss_dlm/Publications/Publications_CRF/brief_c31_final.pdf.
7. Physicians for Human Rights and Bellevue/NYU Program for Survivors of Torture, From Persecution to Prison: The Health Consequences of Detention for Asylum Seekers (June 2003), available at http://www.survivorsoftorture.org/files/pdf/perstoprison2003.pdf.
8. Women's Commission for Refugee Women and Children and Lutheran Immigration and Refugee Service, Locking Up Family Values: The Detention of Immigrant Families (Feb. 2007), pp. 42, 43, available at http://lirs.org/wp-content/uploads/2012/05/RPTLOCKINGUPFAMILYVALUES2007.pdf
9. Department of Homeland Security, Immigration and Customs Enforcement, Salaries and Expenses, FY2014 Cong. Budget Justification, at 6, available at http://www.dhs.gov/sites/default/files/publications/MGMT/DHS-%20Annual%20Performance%20Report%20and%20Congressional-Budget-Justification-FY2014.pdf.
10. S.744 and the Immigration Reform and Control Act of 1986: Lessons Learned or Mistakes Repeated?: Hearing Before the H. Comm. on the Judiciary (May 22, 2013) (Oral testimony of Julie Myers Wood, Former Assistant Secretary of Homeland Security, Immigration and Customs Enforcement), available at http://judiciary.house.gov/_files/hearings/113th/05222013_2/Wood%2005222013.pdf.
11. Julie Myers Wood and Steve J. Martin, WOOD AND MARTIN: Smart Alternatives to Immigrant Detention, Washington Times, Mar. 28, 2013, available at http://www.washingtontimes.com/news/2013/mar/28/smart-alternatives-to-immigrant-detention/.
12. See American Jail Association, Resolution on Pretrial Justice (Oct. 24, 2010), available at http://www.pretrial.org/download/policy-statements/AJA%20Resolution%20on%20Pretrial%20Justice%202011.pdfhttp://www.appa-net.org/eweb/Dynamicpage.aspx?webcode=IE_NewsRelease&wps_key=4ce5b0cc-e5d6-4407-bcab-096640386f02http://www.pretrial.org/wpfb-file/aba-standards-on-pretrial-release-2002-pdf/http://www.heritage.org/research/reports/2012/01/administrative-reforms-in-immigration-and-border-security-policieshttp://www.pretrial.org/wp-content/uploads/2013/02/IACP-LE-Leadership-Role-in-Pretrial-20111.pdfhttp://www.pretrial.org/wp-content/uploads/2013/02/CCJ-Resolution-on-Pretrial-1.pdf http://www.pretrial.org/wp-content/uploads/filebase/policy-statements/NSA%20Pretrial%20Resolution.pdfhttp://www.pretrial.org/solutions/
available at http://www.texaspolicy.com/center/effective-justice/reports/public-safety-and-cost-control-solutions-texas-county-jailshttp://www.cfr.org/immigration/us-immigration-policy/p20030.
13. U.S. Department of Justice, “The Attorney General's Smart on Crime Initiative,” available at http://www.justice.gov/ag/smart-on-crime/ (accessed Sep. 17, 2014).
14. The United Nations Working Group on Arbitrary Detention has stated that immigration detention should be abolished and until then only used as a last resort (U.N. Office of the High Commissioner on Human Rights [OHCHR], Working Group on Arbitrary Detention, Report of the Working Group on Arbitrary Detention, A/HRC/13/30 (Jan. 18, 2010), para. 58 and 59, available at http://daccess-dds-ny.un.org/doc/UNDOC/GEN/G10/102/94/PDF/G1010294.pdf?OpenElement). The Convention on the Rights of the Child, to which the United States is a signatory, requires that the detention of a child be used only as a last resort. (Convention on the Rights of the Child, article 37(b).) The UN Committee on the Rights of the Child clarifies further that “States should expeditiously and completely cease the detention of children on the basis of their immigration status” (2012 Day of General Discussion, Geneva, Switz., Sep. 28, 2012, U.N. Committee on the Rights of the Child [CRC], Report of the 2012 Day of General Discussion: The Rights of All Children in the Context of International Migration (2012), para. 78, available at http://www.ohchr.org/Documents/HRBodies/CRC/Discussions/2012/DGD2012ReportAndRecommendations.pdf). The UNHCR Executive Committee has stated that “States should refrain from detaining children, and do so only as a measure of last resort and for the shortest appropriate period of time, while considering the best interests of the child” (U.N. High Commissioner for Refugees [UNHCR], Conclusion on Children at Risk (Oct. 5 2007), No. 107 (LVIII) – 2007, available at: http://www.refworld.org/docid/471897232.html).
15. Press Release, American Civil Liberties Union, Groups Sue U.S. Government over Life-Threatening Deportation Process against Mothers and Children Escaping Extreme Violence in Central America (Aug. 22, 2014), available at https://www.aclu.org/immigrants-rights/groups-sue-us-government-over-life-threatening-deportation-process-against-mothers. 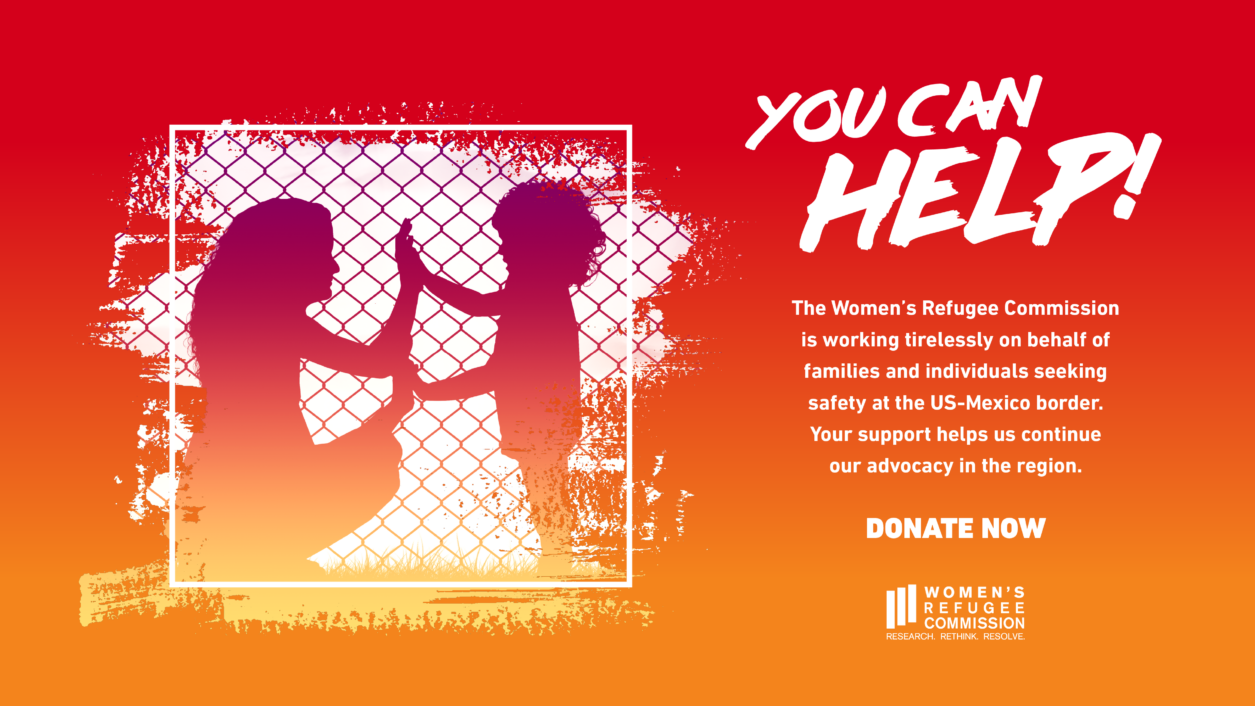